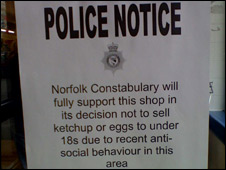 Supermarkets have banned sales of eggs and tomato ketchup to young people in a bid to cut anti-social behaviour.

About a dozen residents in the Charles Close area of Caister-on-Sea, near Great Yarmouth, have reported tomato sauce being squirted at cars and homes.

Norfolk Police asked supermarkets in the town to challenge youths trying to buy sauces in squirty bottles or eggs.